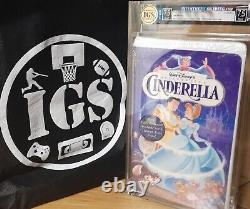 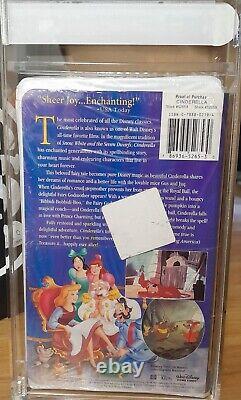 Original Rare, Hard to Find Factory Sealed EARLY PRINTING WALT DISNEY Home Video BIG BOX, SEALED, GRADED by IGS (Investment Grading Service) with a 7.5 / 7.5 DOUBLE NEAR. This particular release was a 1995 PRINTING as part of the MASTERPIECE COLLECTION BIG BOX edition. An investment level video collectible from the earliest days of the home video entertainment industry. Directed by Clyde Geronimi, Wilfred Jackson, Hamilton Luske. When Cinderella's cruel stepmother prevents her from attending the Royal Ball, she gets some unexpected help from the lovable mice Gus and Jaq and from her Fairy Godmother.

Beautiful Cinderella, a young woman with a heart of gold, sees her world turn upside down when her beloved mother dies, and her pained father remarries another woman: the wicked widow Lady Tremaine, the insufferable mother of cruel and jealous Anastasia and Drizella. As a result, things go from bad to worse, and before long, Cinderella finds herself at the mercy of the Lady. Now, doomed to serve her forever, shabby and neglected Cinderella doesn't stand a chance of attending the King's royal ball. Of course, captivating the handsome Prince is out of the question. As the night advances, will Cinderella ever find her own Prince Charming?

Nominated for THREE Academy Award OSCAR Nominations include Best Musical Score. BEHIND THE SCENES TRIVIA : Walt Disney had not had a huge hit since Snow White and the Seven Dwarfs (1937).

Walt Disney and his animators turned back to feature film production in 1948 after producing a string of package films with the idea of adapting Charles Perrault's "Cendrillon" into a motion picture. The production of this film was regarded as a major gamble on Disney's part. Through faith, hard work, and a bit of luck, everyone associated with the film's production were determined to create "Cinderella", a great film that would stand the test of time for all time. As a result, it was a spectacular hit, becoming the greatest critical and commercial hit for the studio since Snow White and the Seven Dwarfs, as well as its first commercial hit since Song of the South (1946), and helped reverse the studio's fortunes. Cinderella received overwhelming critical acclaim and many international film honors, including three Academy Award nominations.

The film also became the third highest grossing film of 1950, behind King Solomon's Mines (1950) and the Academy Award-winning All About Eve (1950), respectively. The profits from its release, with the additional profits from record sales, music publishing, publications and other merchandise gave Disney the cash flow to finance a slate of productions (animated and live action), establish his own distribution company, enter television production, and begin building Disneyland during the decade. Much like Cinderella herself, the Walt Disney Studios had its own rags to riches story, which eventually propelled them back to greatness and prominence after years of misfortune. Some images may be representative. Some items may be Brand New Factory Sealed, while a few may slip through in a lesser quality.

These items are inspected but individual items slip through occasionally, and we apologize for this inconsistency. This item is in the category "Movies & TV\VHS Tapes". The seller is "hardtofindrare" and is located in this country: US. This item can be shipped to North, South, or Latin America, all countries in Europe, Japan, Australia.